The 2022 Jeep Grand Wagoneer is Jeep’s first attempt at a truly luxurious interior. At its price, the Grand Wagoneer is expected to go up against full-size luxury veterans like the Cadillac Escalade and Lincoln Navigator.

The question is: Did Jeep pull it off? Largely, yes. In some areas, no.

We will start with yes. Our test vehicle is the Grand Wagoneer Obsidian, which is the second-highest trim level available, just below the Series III. It starts at $96,845, and after options are counted, its final price is $109,025. At first glance, this interior looks and smells like every penny of that exorbitant price. Get the idea out of your head that Jeep can’t build a luxury car, because it can, and it did. 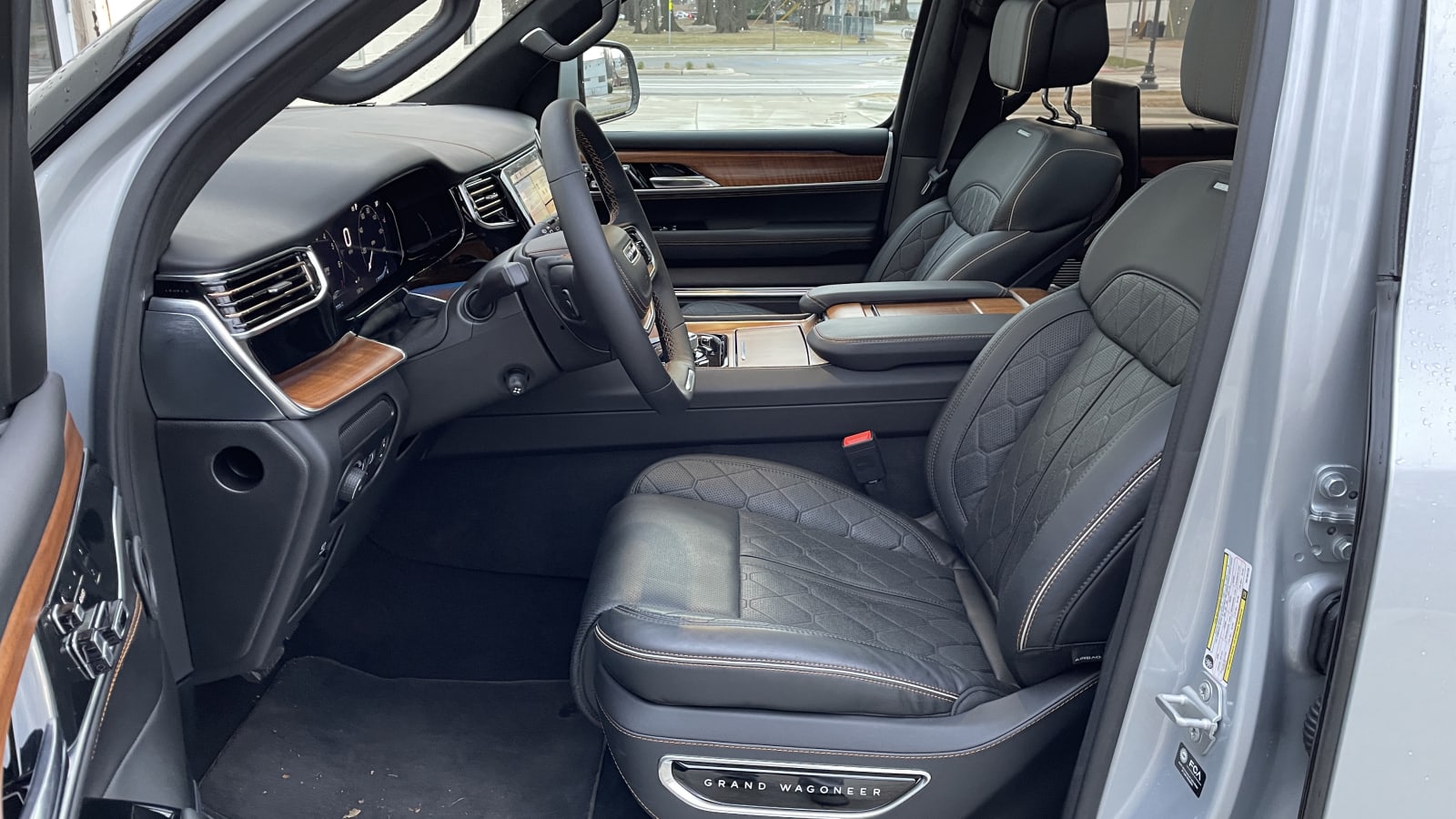 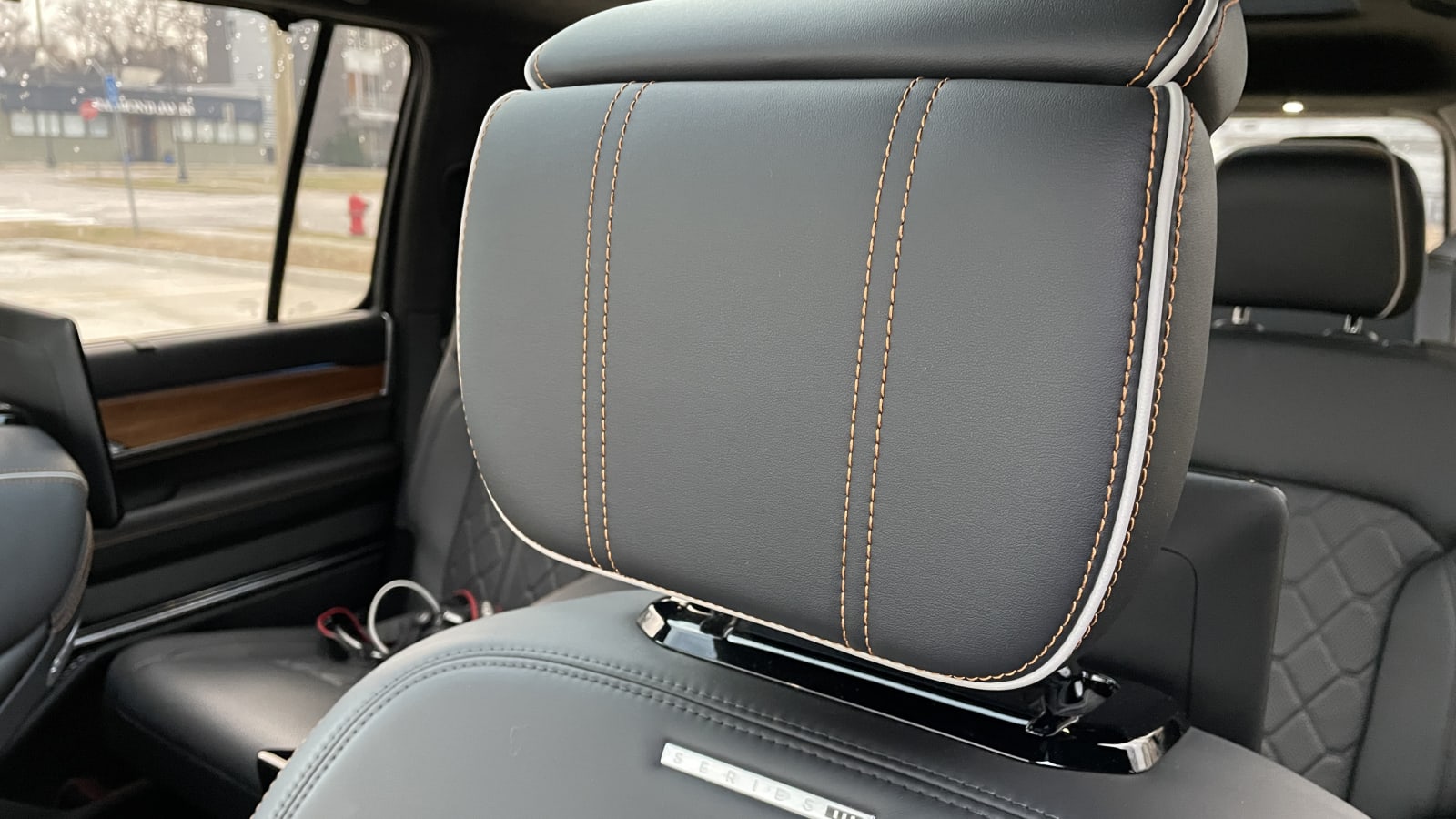 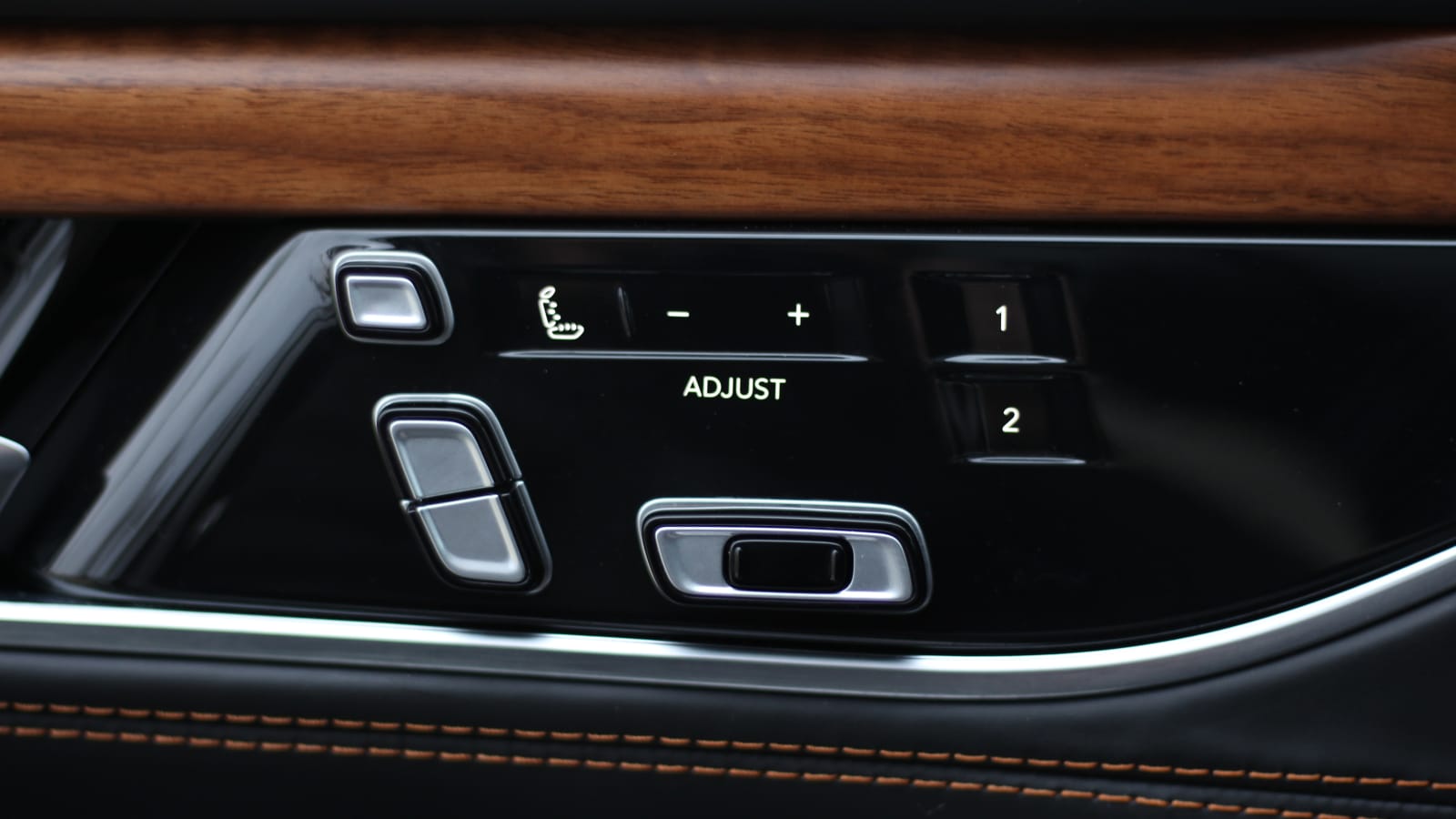 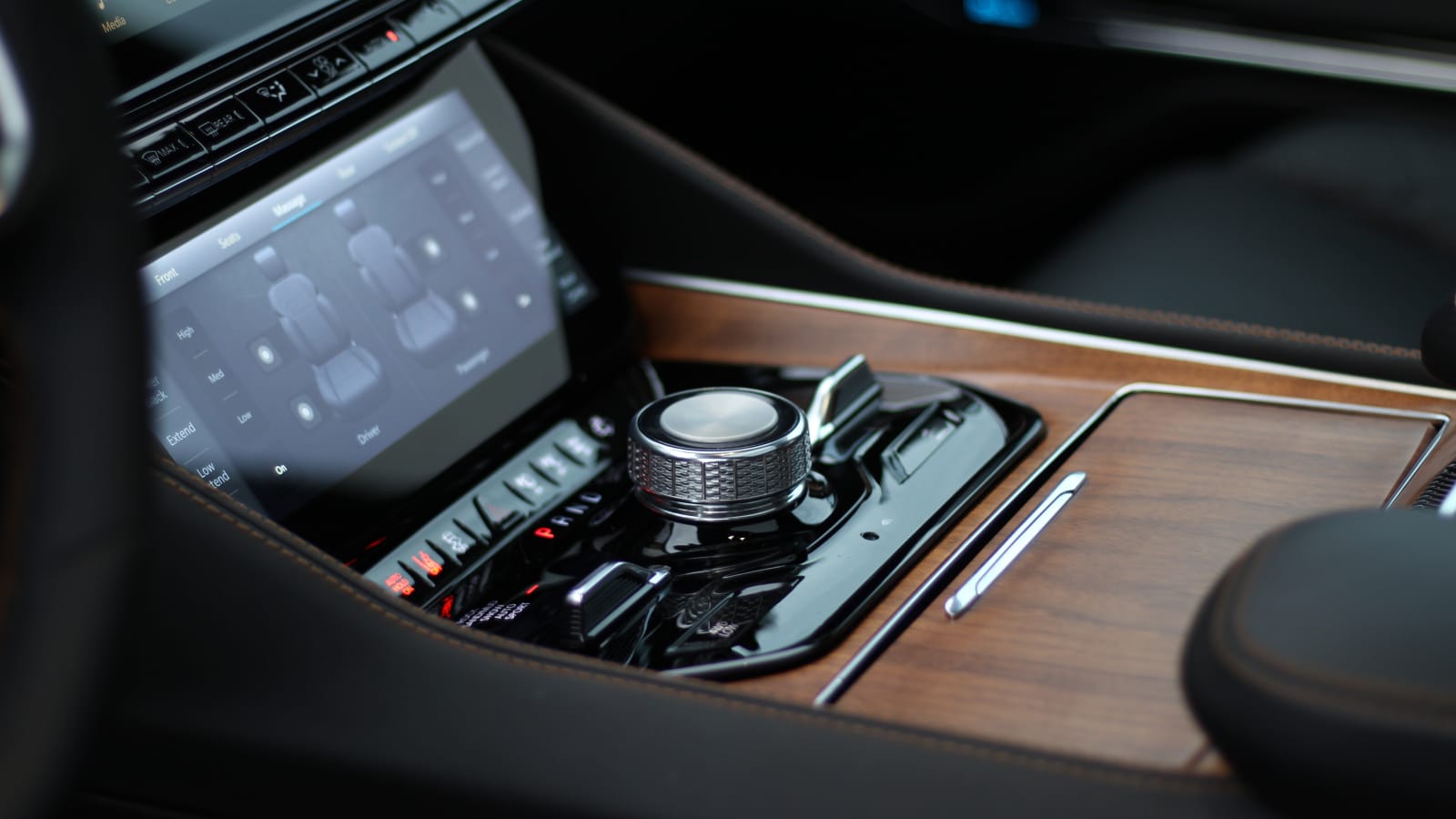 The 24-way Palermo leather-wrapped heated, cooled and massaging seats are beautiful to look at with good padding, contrast stitching and prominent contrast piping. Even the power headrest is a work of art, and the seat controls themselves are beautifully presented on the Mercedes-style door. Perhaps even more remarkable is the amount of real walnut wood trim that adorns the interior. It’s cleverly placed throughout, dominates the center console and elevates this interior considerably. Where you don’t see wood, Jeep uses gloss black trim, leather and metal. We’re normally Big Mad about excessive use of gloss black trim, but the only place we can nitpick is its use around the gear selector knob. It’s a very tactile area that will collect fingerprints and dust, but elsewhere gloss black is used on vertical surfaces where it’s not as prone to problems. Good. 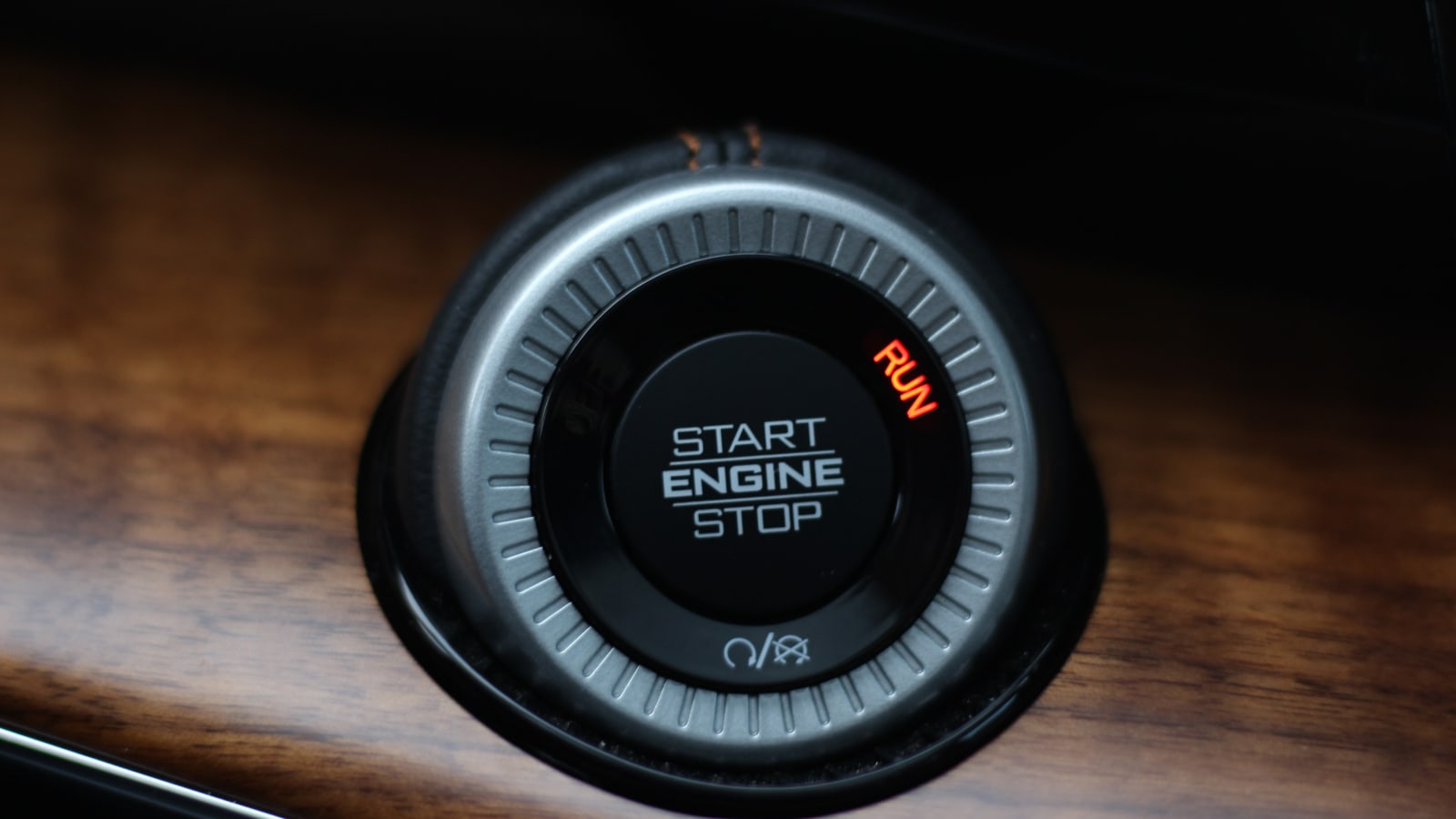 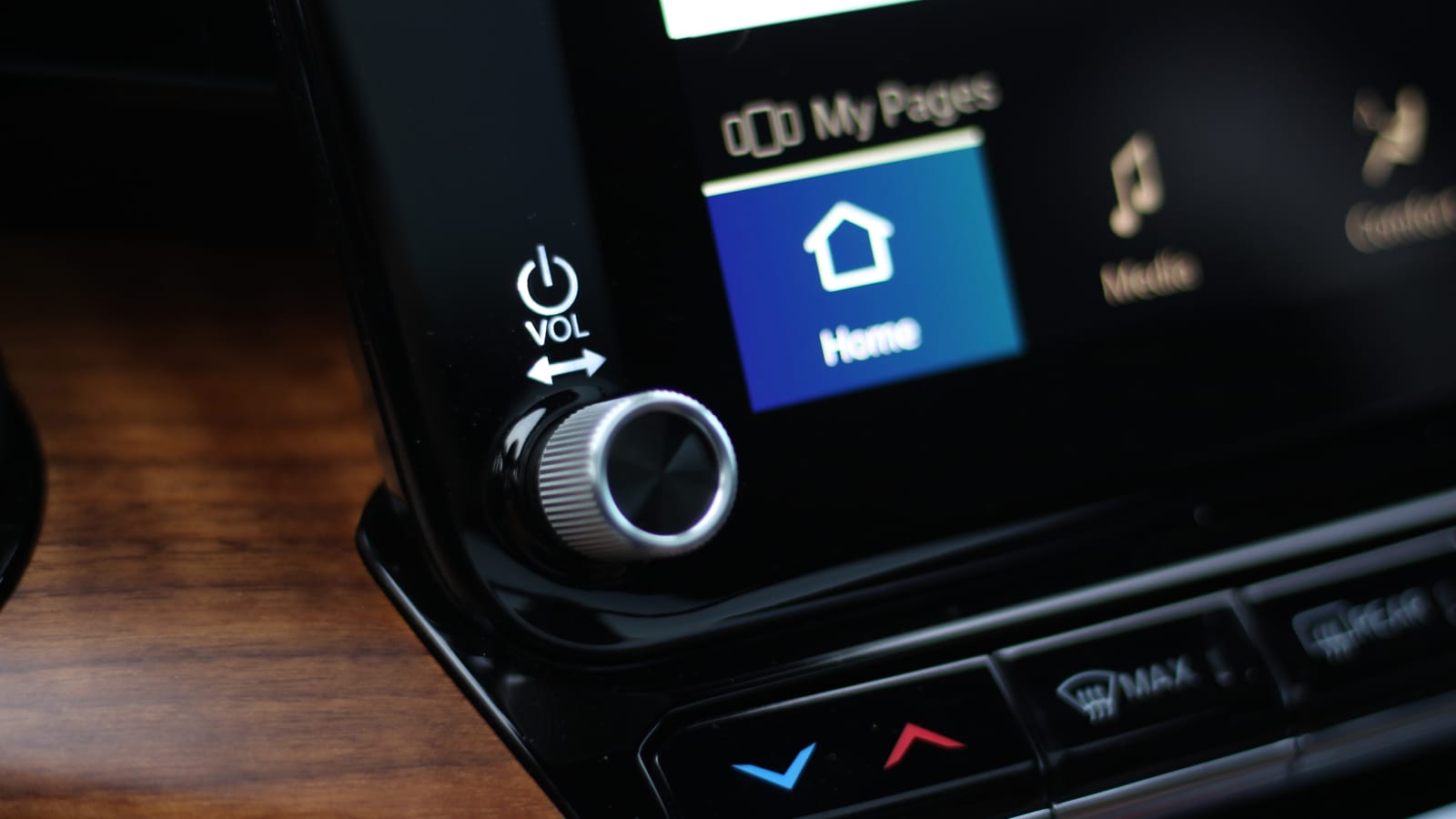 Metal-trimmed knobs and knobs are another hallmark of luxury, and this Jeep has it in spades. The aforementioned gear knob is an intricately shaped piece of aluminum, and it’s gorgeous to use – just wear gloves in the winter, as it gets cold. The volume and adjustment knob are derived from McIntosh (read more about the audio system here), and they turn with weight and a quality feel. The drive mode selector is a metal switch, as is the ride height selector. Really, there’s little you touch in this interior that’s substandard – even the on/off button is featured as a centerpiece, surrounded by a bezel and wrapped in French stitch, while seated on a piece of carved wood. If we had to complain, we’d direct our anger at the annoying flat black turn signal and wiper stalks that are just parts pulled from the Stellantis line. 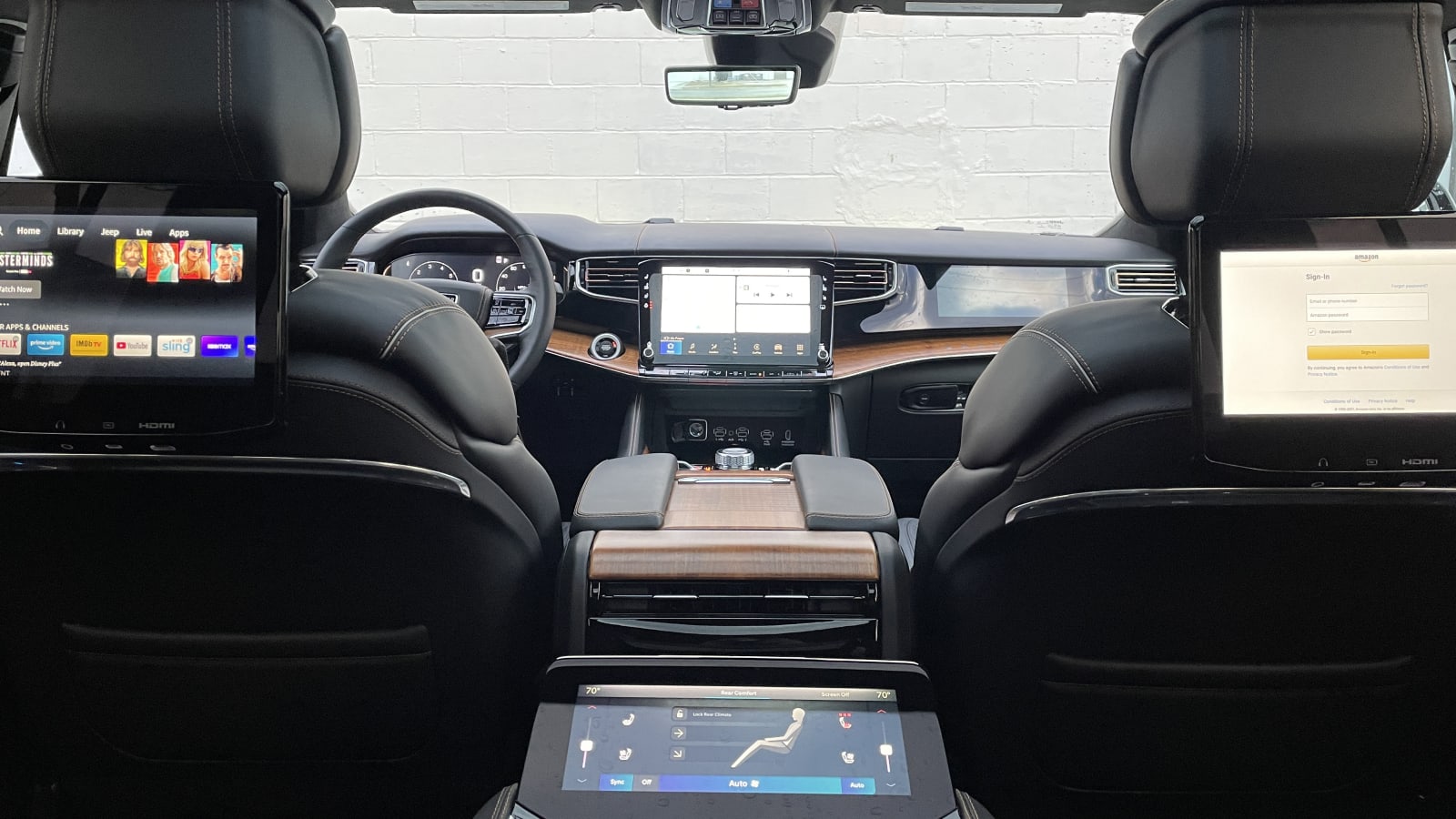 It’s a wonder we haven’t mentioned screens yet, because there are so many of them. With the Rear Entertainment Pack, there are eight screens in total, including the digital rear-view mirror. Most of them are great at their execution, but there are some issues that are better called growing pains or eh? moments of the user experience. 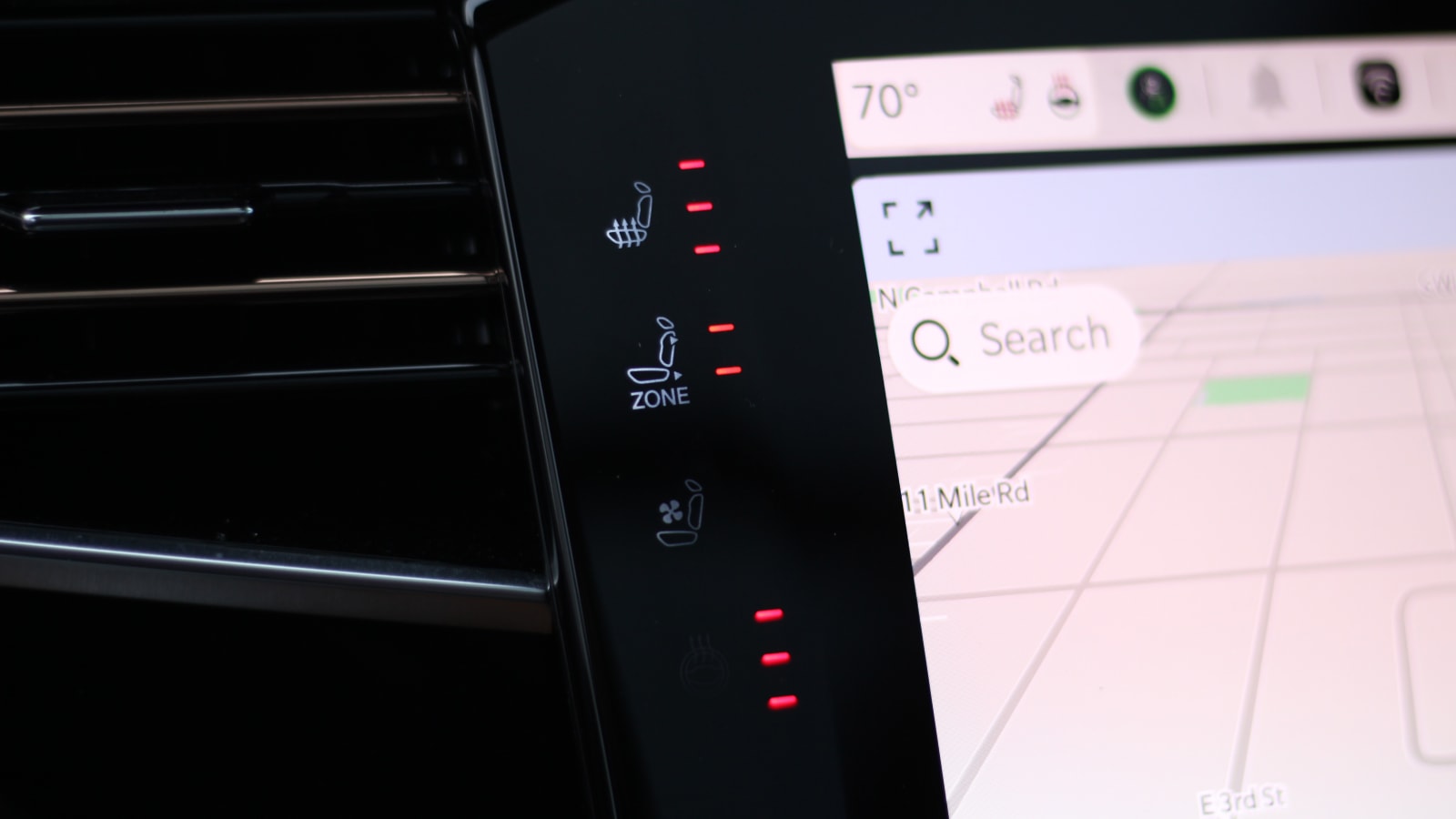 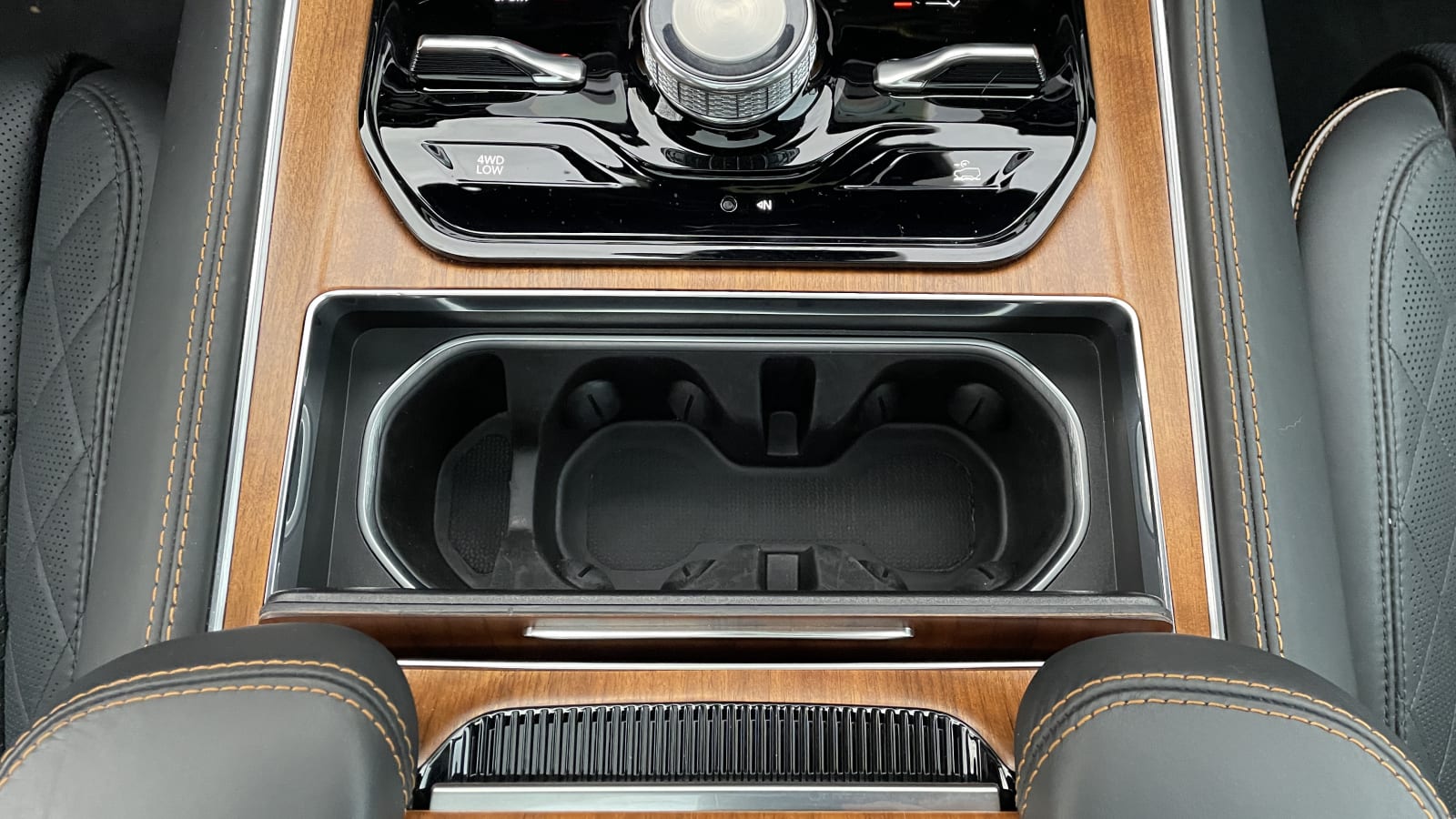 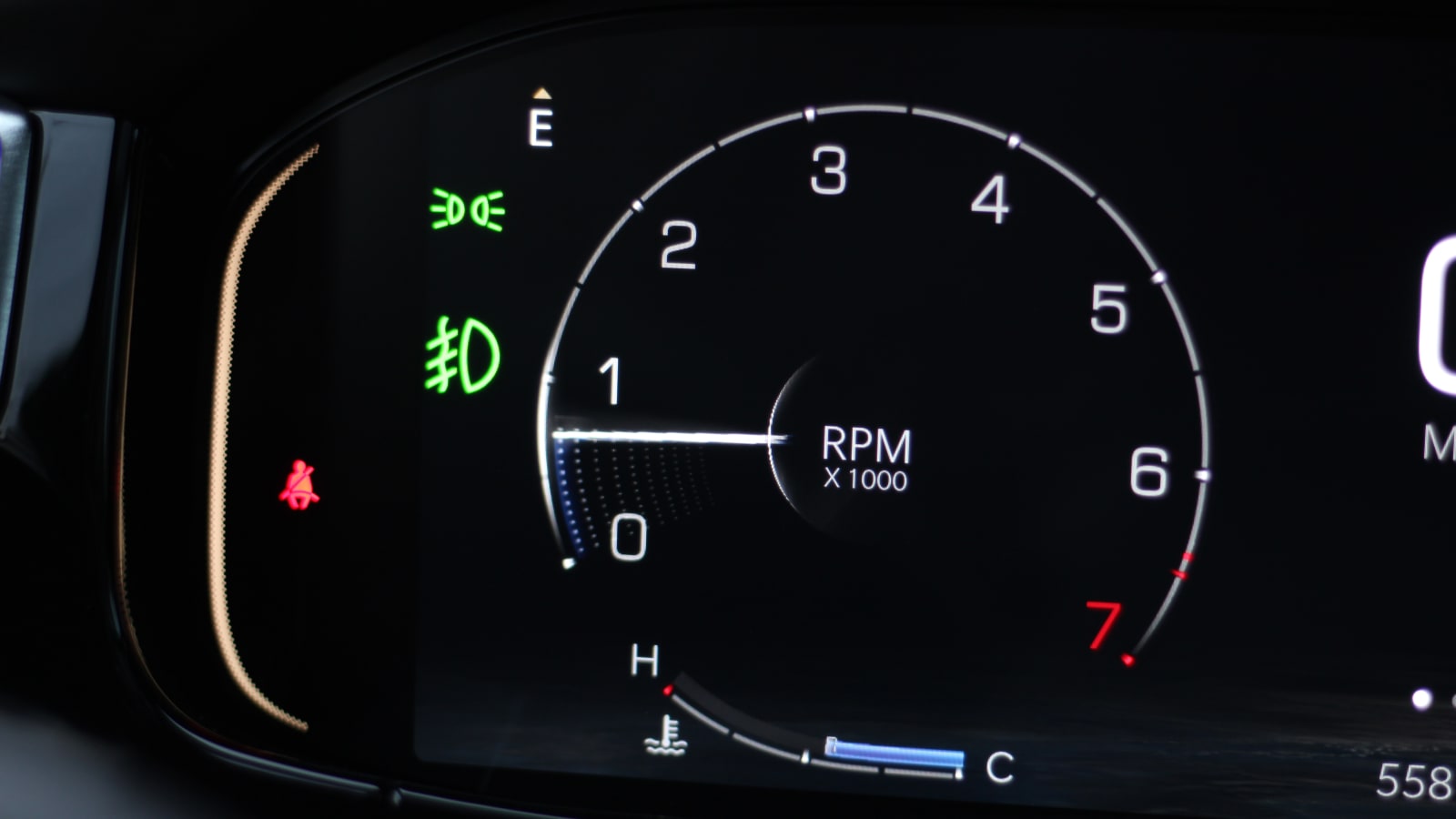 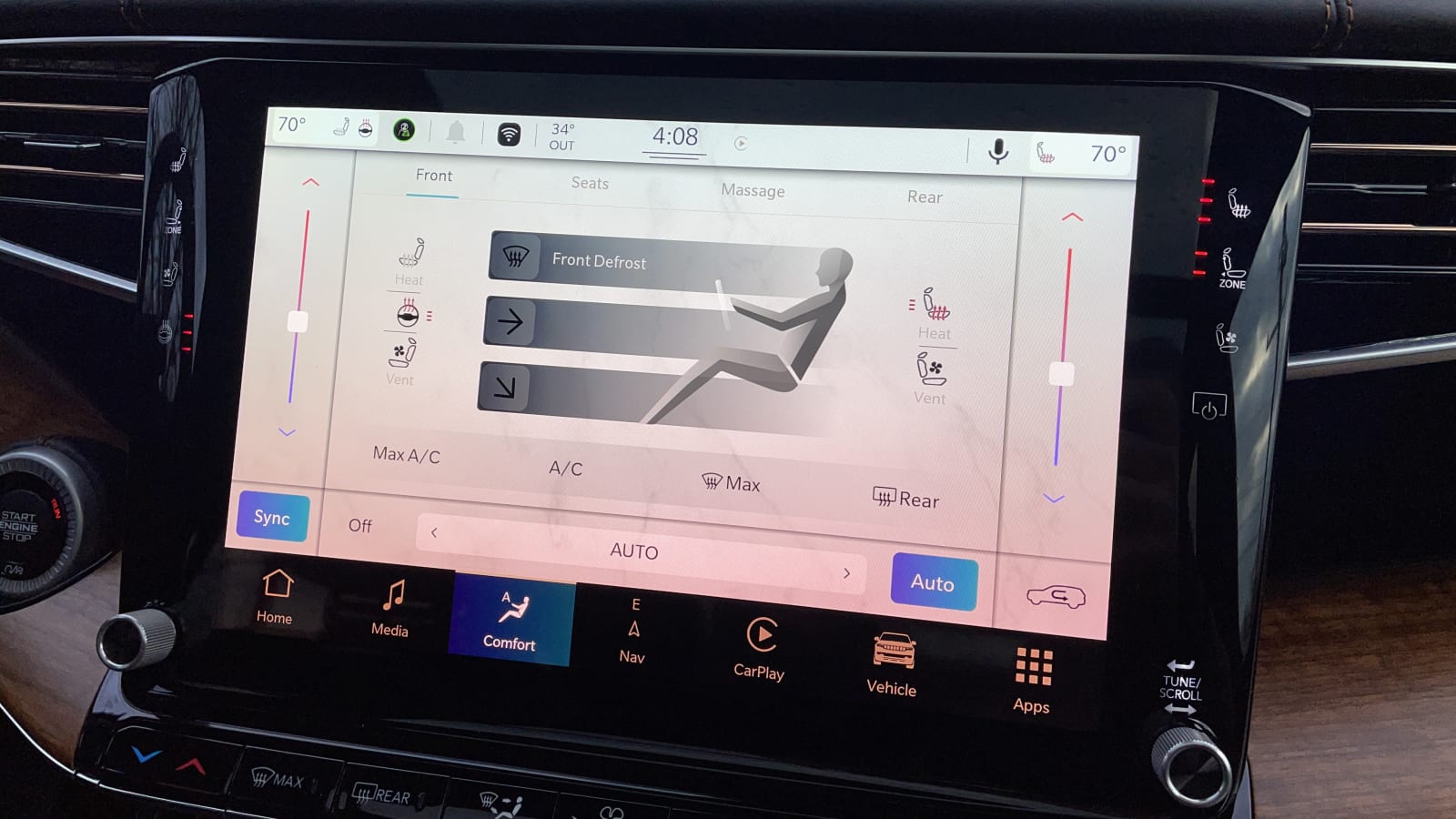 For example, the heated/cooled seats are controlled by touch zones on a piano black trim sheet (upper left). Their backlighting is uneven, and that makes them look a bit cheap/random at night. In addition, their functionality is questionable. It would take several hits to activate them on each occasion, and forget about trying to light them with gloves. We sometimes had to turn them on via the touchscreen controls, as they just didn’t respond to our touches/presses.

Another quirk is the placement of the descent control. Again, this is a touch zone on the center console. Passengers accidentally hit this button multiple times during the week of testing, triggering the associated beep and a giant message that pops up in the dashboard when you least expect it. Maybe make this a harder physical button to press, Jeep?

Another distraction-related quirk in the instrument cluster is the constant zooming in and out of the gauges. The cluster screen will override a cruise control shift by making it appear large on the screen while minimizing the gauges behind the message. Just a moment later, the gauges return to their normal size. If you switch between engaging and disengaging cruise control or changing the set speed frequently enough, it’s like watching a boomerang come and go towards you in the dash, and it’s distracting. Finally, for some reason Jeep decided to make the green lights in the cluster let you know that the headlights and fog lights are about five times larger than in any other car. It’s just weird, and it feels like a waste of space.

Moving on from the cluster, the last problematic screen on this car is the rear view camera mirror. Unlike GM’s rearview camera mirror, Jeep’s is particularly ill-suited to inclement weather or nighttime driving. Rain, snow or salt make vision worse than a traditional mirror, and the glare from headlights at night does the same. Other companies’ rear camera mirrors are designed to handle these situations much better than Jeep’s, as the Grand Wagoneer is only useful in ideal daytime weather conditions. 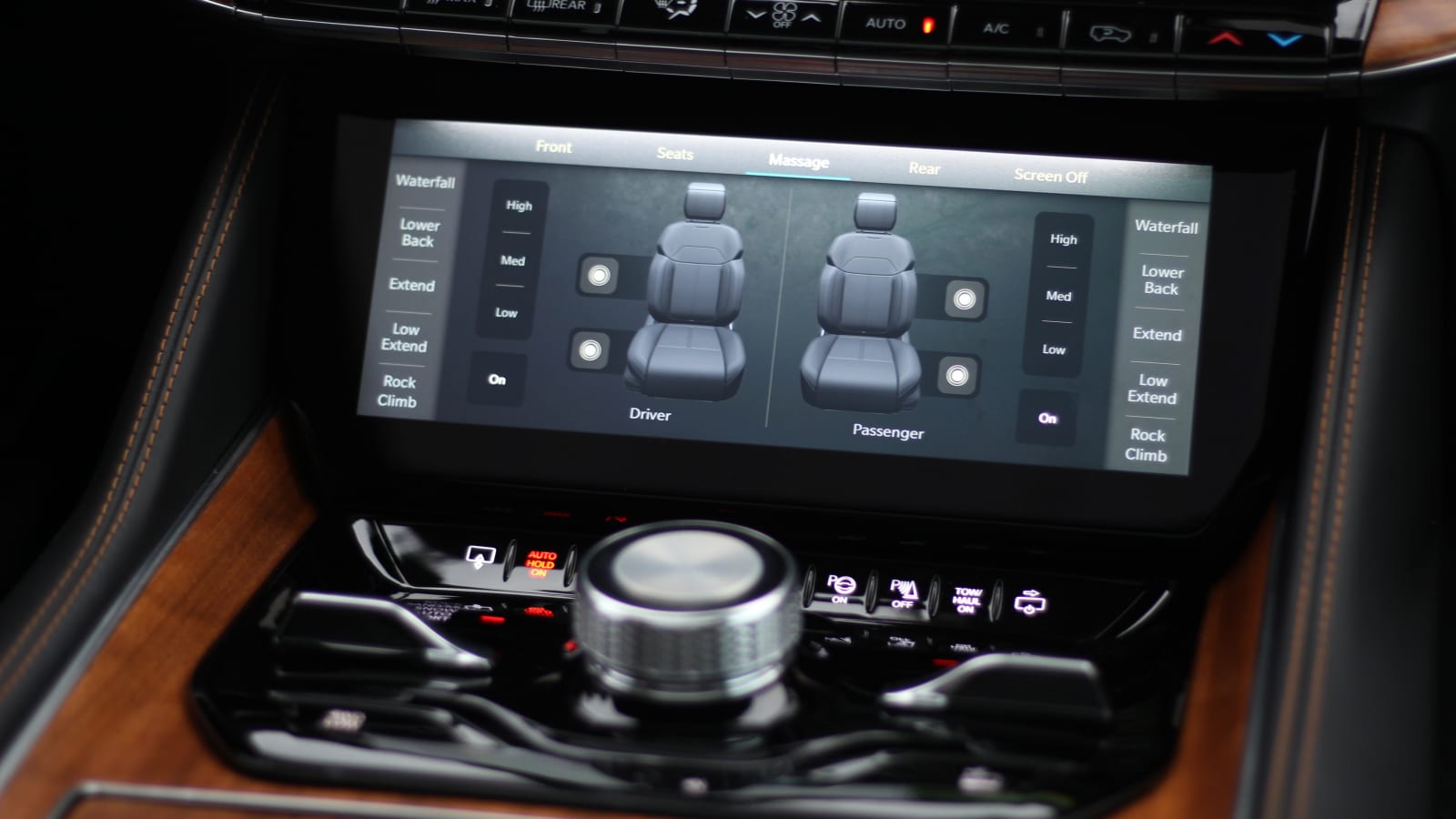 Back to the good, though. All the other screens are really great to use, even the nifty screen that folds up and tucks under the main infotainment screen. Placing the wireless charger behind this screen is a great way to completely hide a phone away from distractions. And just like we found in the Grand Cherokee, the dedicated passenger display is the same distraction-free stroke of genius. The good tech vibes continue in the back, where second-row users have a screen between them on the fixed center console for vital car functions as well as screens on the back of the front seats for watching movies. , television or even playing video games. Yes, you can plug three game consoles into a Grand Wagoneer and have a little party (the third console can be played through the passenger screen up front). 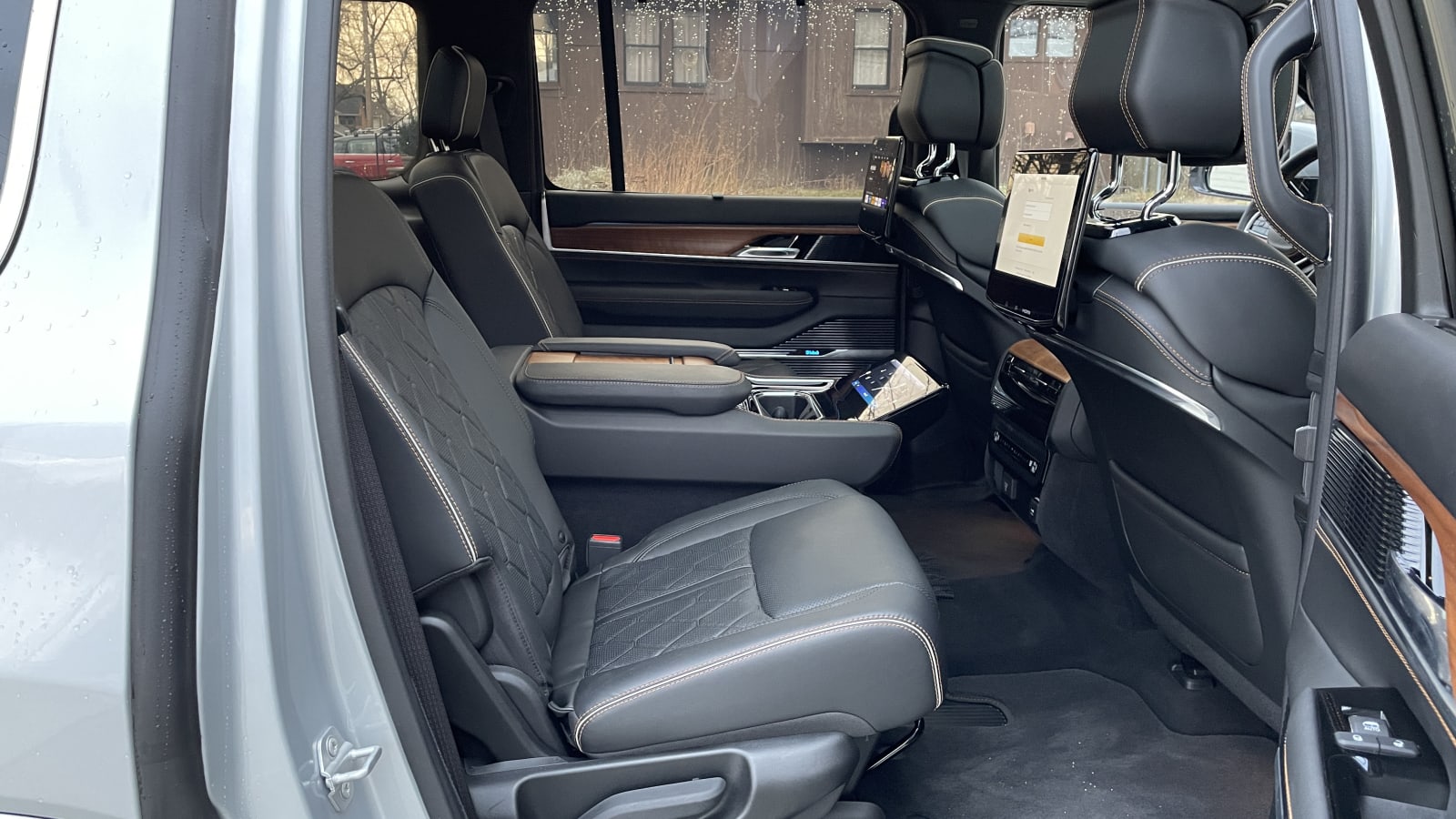 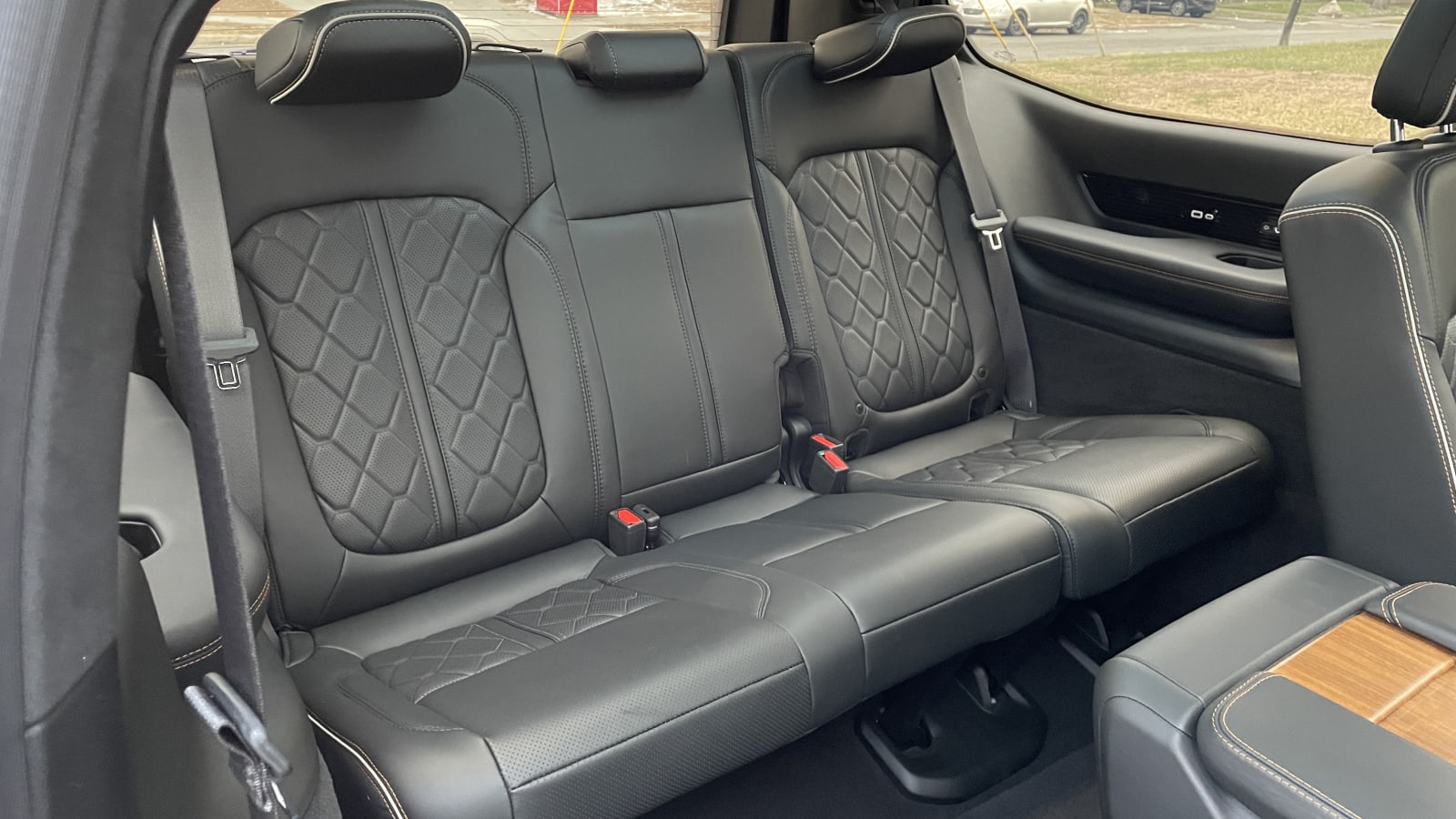 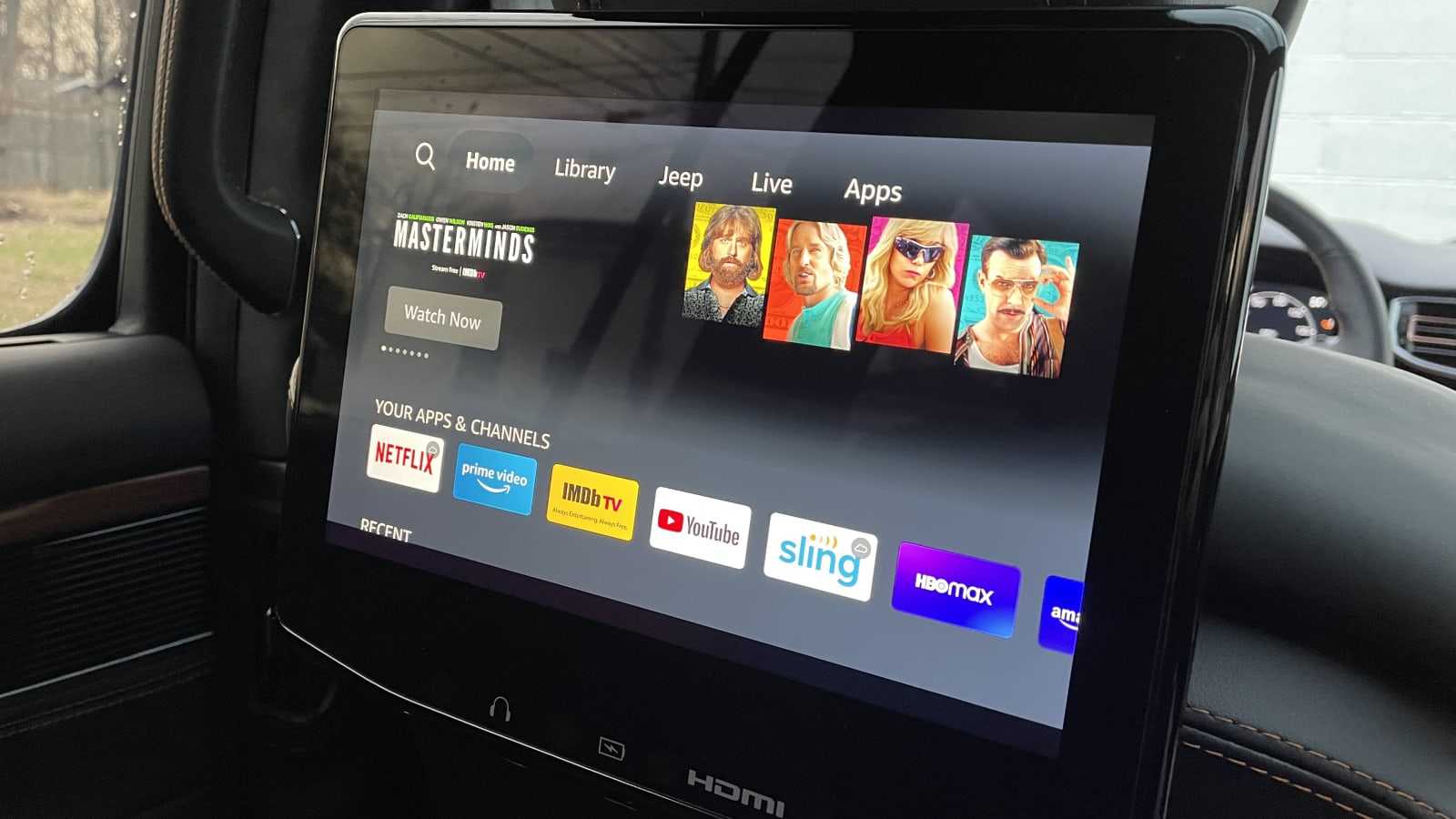 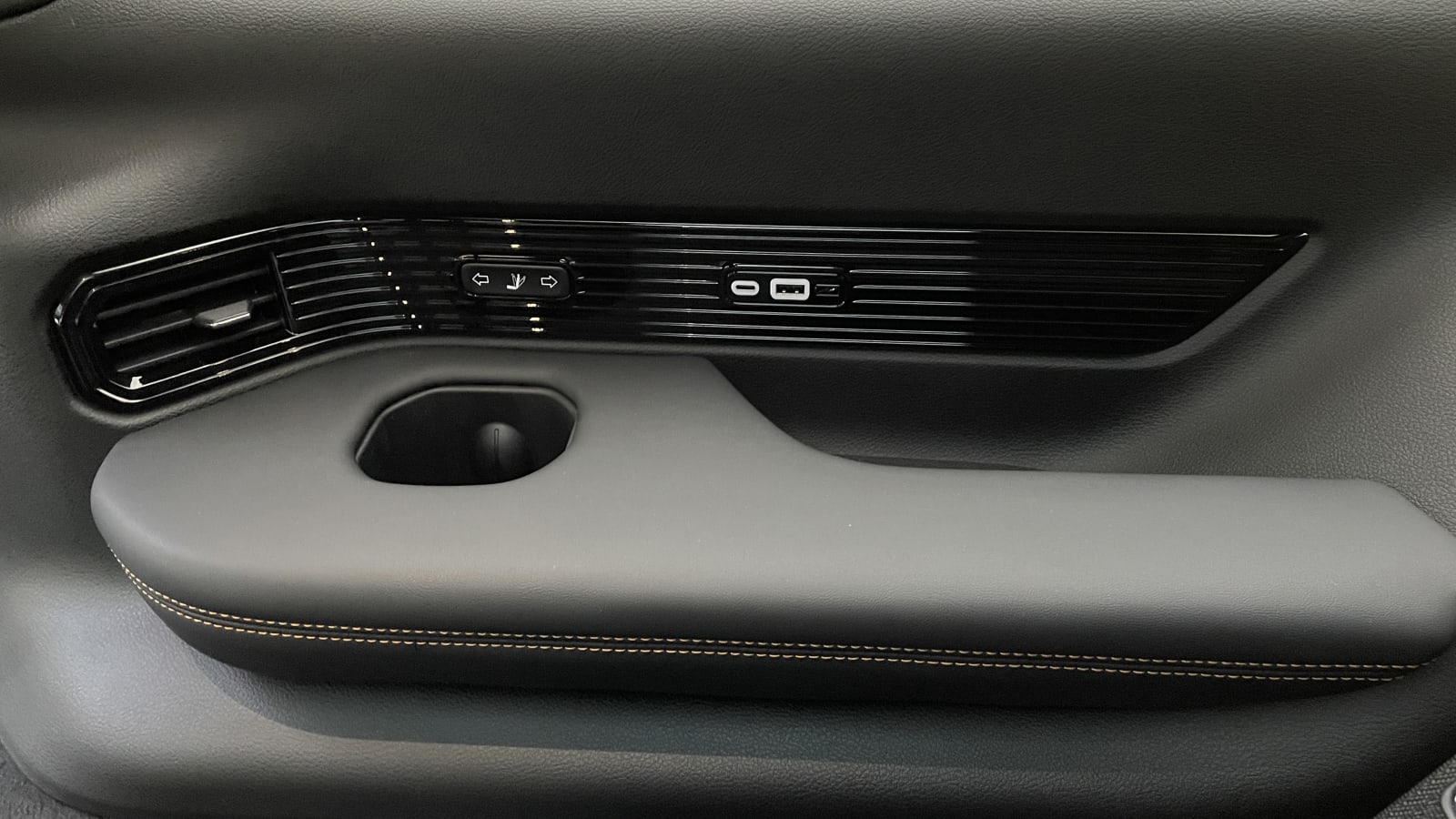 Being as big as the Grand Wagoneer, there’s no shortage of room to party. You can comfortably stretch both in second and third row. Seriously, the third row is a lot better than you’d imagine, and we’re quite sure it surpasses the Escalade/Tahoe and Navigator/Expedition in terms of space and comfort (although it would take a consecutive time to know for sure). It has well-designed intakes and even trim all the way to make it less penalizing than any other full-size SUV. No matter where you sit in this SUV behemoth, it’s going to be fun. There will also be plenty of space for your belongings, even with all the raised rows.

There’s enough sound deadening throughout that completely silences the 6.4-liter V8 when you don’t want to hear it, but the engine and exhaust are aggressive enough that its powerful noise envelops the cabin when you do. lay on the ground. The McIntosh audio system is second to none in user experience, and come on, you can brag about having a McIntosh audio system in your car.

In many ways, the Grand Wagoneer is the equal of the Escalade and the Navigator. It certainly doesn’t skimp on luxury or comfort – the massaging seats are best in class. You cannot rely on the use of materials, the space or the lack of available technology. However, the problem areas we mentioned could definitely use some cleaning to make the whole car experience a bit more seamless and user-friendly. As a first-try luxury effort, Jeep’s final product is quite remarkable, and its interior is well worth what’s on that sticker. Just as our editor said when he first drove a Grand Wagoneer, Jeep is officially a luxury vehicle maker.