The 49ers will likely open the season Sunday in Chicago with new starters across their interior offensive line. Center Jake Brendel, left guard Aaron Banks and rookie right guard Spencer Burford saw the majority of first-team action at their respective positions throughout training camp and preseason.

Brendel, Banks and Burford. Some might start calling them the “law firm,” thanks to alliteration. The 49ers are just hoping the trio can deliver competent play on a front that has leaked into pass protection in recent years. The early development of new starting quarterback Trey Lance may depend on it.

We’ve taken a look at the 49ers’ prospects with Brendel (here), Banks (here) and Burford (here). Daniel Brunskill, working after a hamstring strain, is expected to eventually serve as depth in all three of those spots, though he didn’t return to practice on Monday. Colton McKivitz and Jaylon Moore can also theoretically isolate guard positions, although both have been focused on bolstering San Francisco’s offensive tackle depth over the past month.

That leaves three relatively unknown newcomers to round out the potentially vital depth of the 49ers’ interior O line: Nick Zakelj, Blake Hance and Jason Poe. The first two are on the 53-man roster, while Poe joined the practice squad after the team waived him on the day of the cutback.

How is this trio? General manager John Lynch spoke at length last Thursday, and Zakelj, Hance and Poe were the main talking points.

The 49ers drafted this rookie from Fordham in the sixth round. (The Slovenian surname of Zakelj is pronounced correctly zah-KELL, but 49ers coach Kyle Shanahan jokingly calls him “Zakel J,” according to Lynch.)

Zakelj struggled mightily early in camp and into Week 1 of preseason, but surged late to earn a spot on the 53-man roster. Here’s the progression of Zakelj’s Pro Football Focus pass blocking ratings at guard over the 49ers’ three exhibition games: 22.3, 69.8 and 81.3.

‘He loves to get the better of people mentally’: The rise of 49ers rookie Nick Zakelj

“He’s just a guy getting better every day, and that’s what you want in this league,” Lynch said. “He came from a small school, less competition, and so it was probably an eye opener when he got here, just like it was in the Senior Bowl. I remember (assistant GM) Adam (Peters) talking about it at the Senior Bowl, his day 2 was so much better than his day 1. And he’s got a lot in his body, and he just kept looking more and more like a NFL player with each given day.

It turns out that Zakelj also saw rapid progress after first signing up at Fordham as a zero-star recruit from suburban Cleveland. His fast learner track record now extends to the pros.

“Accelerate the ball,” Zakelj said on Monday. “That’s how (offensive line) coach (Chris) Foerster likes us to play. I think it’s something that took some getting used to. I think as I refined the technique and got more comfortable I was able to increase that speed more and more and to a level that I was comfortable with .

The 49ers believe Zakelj’s progress can now translate into success at the most cerebral position in the O line.

We don’t want to say too much (about him), but we think he’s focused on his future,” Lynch said. “And it’s going to start cracking here.” We will include this part of this repertoire thinking that the more you can do, the better for him, the better for us.

Said Zakelj: “Even today I was kind of getting more reps, actually going against the defense, trying to work that. Because it’s very different from getting pre-workout shots. It’s something that I want to add to my arsenal, to be able to play in the middle, to have so much versatility and to really help the team in any way I can.

Running back Trey Sermon is no longer a 49er thanks in large part to Hance, who became available after the roster was reduced when Cleveland waived him. The 49ers, faced with a litany of questions across the front, jumped at the chance to add depth to the O line. They demanded waivers from Hance and cut Sermon to make room on the roster. 53 men. 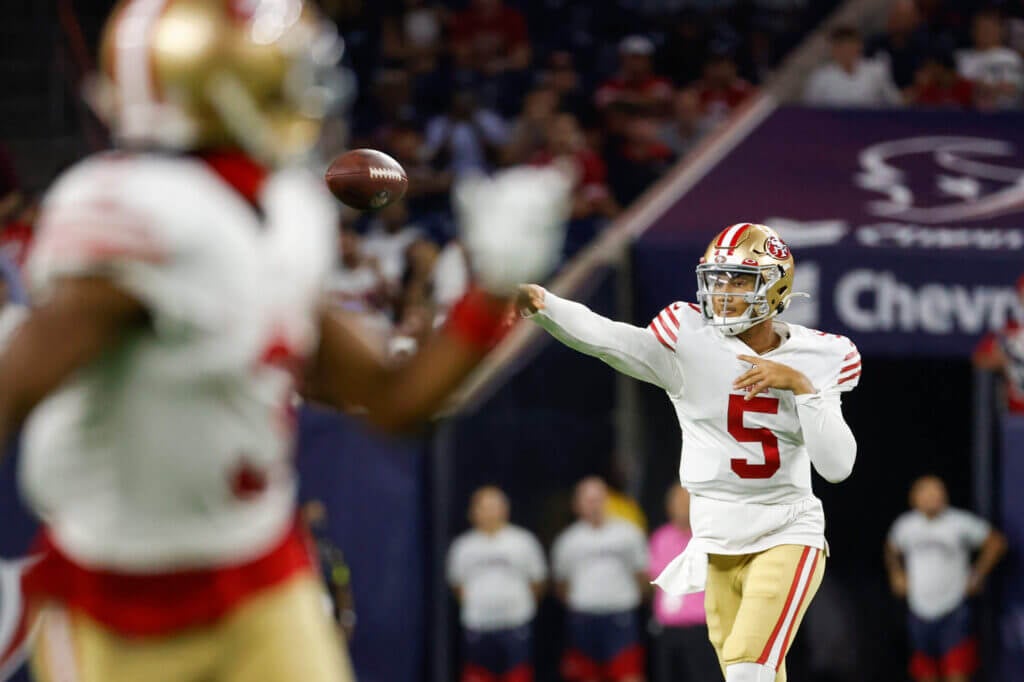 49ers mailbag: A look at Trey Lance’s leash; what is the cap depth chart?

“He brings real five-position versatility, so sometimes we talk about the versatility of guys – he’s done that in our league,” Lynch said. “Played five positions and has that versatility down the middle, which is so important. We claimed we weren’t sure if we would get it, and we were thrilled when we did.

Last week, Lynch said he hoped Brunskill would return from his hamstring injury this week, but “you never know with these things”. So the 49ers have been hungry for a center to back up Brendel, and Hance could immediately fill that role on Sunday.

Hance had 644 total snaps for Cleveland last season at two tackle points, with PFF rating him as a strong run blocker (70.3) and poor pass protector (36.9). But in the 2020 playoffs, Hance played his only NFL action game at left guard for the Browns and delivered a very strong pass blocking score of 79.2.

Maybe it will be useful for the 49ers as well.

“He played left tackle, he played right tackle,” Lynch said. “He played against both guards, so we are delighted with that. These guys are extremely helpful.

Said Hance on Monday of his transition from Cleveland to the 49ers: “There’s a lot of overlap in the patterns. Some of the calls are different and so on, but when it comes to patterns there are a lot of similarities, a lot of extended areas and so on. You just have to get used to the calls and the techniques.

Poe had a legitimate chance of cracking the initial roster of 53 players, as evidenced by him taking first-team snaps in training instead of Banks. But the 49ers ended up giving up Mercer’s undrafted rookie and praying he cleared the waivers so they could re-sign him to their practice squad.

“Poe, it was tough, man, because this guy, his fight,” Lynch said. “You talk about a guy you respect and the joy he brings to playing football, I think it’s palpable. You feel it, and we were clinging on dearly to life. It was a tough call , and the guys love him – like in the locker room when he makes a play, everybody, you hear him.

Listed at 6-foot-1 (which 49ers star Trent Williams recently hinted could be generous), Poe is the shortest offensive lineman in the NFL. This usually results in a disadvantage in pass protection. But Foerster noted that Poe is built like a “bowling ball” and actually exploits his low center of gravity to gain a blocking advantage.

“Guys like that, despite the challenges of being a bit smaller, when you have heart, fight and it’s not just that – he has ability,” Lynch said. “These guys tend to get away with it.”

Poe recorded a 4.9 laser-timed 40-yard dash this offseason, which would have ranked second among offensive linemen at the NFL’s scouting combine (he wasn’t invited to the ‘event).

Lynch said the 49ers have yet to consider Poe for a role away from the offensive line. But the general manager’s response to a question about the 49ers likely to move Poe was indicative of the team’s affinity for the rookie. They certainly don’t want Poe out of their practice squad.

“My concerns were some of these other teams in the league,” Lynch said. “God, is someone going to bring him in as a guard/fullback/tight end? So I should probably shut up now. I like the young man a lot.”

Train yourself odds and ends:

• Deebo Samuel returned to training on Monday after missing last week’s session with a bruise on the back of his knee. He and Brandon Aiyuk come into the season as the top two wides with Jauan Jennings in the No. 3 role. Rookie Danny Gray is the deep threat, while Ray-Ray McCloud is a weapon Shanahan will no doubt unleash in various roles.

• Brunskill has still not trained since suffering a hamstring injury in the pre-season opener. That begs the question of who will be center reserve on Sunday against the Bears. The main candidates are Hance and Keaton Sutherland, who was the team’s No. 3 center to open training camp and could be elevated from the practice squad for Sunday’s game.

• Defensive back Dontae Johnson (ribs) is out of the blue, non-contact jersey he’s been wearing recently, but linebacker Dre Greenlaw is wearing one. He appears to be struggling with an arm or elbow issue that kept him out of training last week.

• In addition to Brunskill, linebacker Oren Burks (knee) did not practice. The 49ers will release their first injury report of the season on Wednesday.

• The 49ers have added two more players to their practice roster: linebacker Buddy Johnson, a fourth-round pick from the Steelers last year, and offensive lineman Leroy Watson. The addition of Watson gives the team two former Texas-San Antonio Roadrunners in the offensive line room, with Burford being the other.

The 49ers signed second-year LB Buddy Johnson to their practice squad, according to his IG. Johnson was Pittsburgh’s 2021 fourth-round draft pick.

SF still has a practice squad spot, based on publicly available information pic.twitter.com/7WibPJygMe

Burford noted that Watson was a tight end in college who specialized in run blocking. He began his conversion to the offensive line after the Falcons signed him after the draft. Watson was 6-5, 270 at that time. He is now up to 305 pounds.

“He blocked really well when he was a tight end, so I’m not surprised (at the conversion),” Burford said. “He’s a great athlete.”

Bought an £80,000 bespoke motorhome with gold interior and all the extras, can’t wait to explore the UK with my boys

Interior Minister: There is evidence that Amini was not beaten in police custody