SPIED: Inside the #1 smart electric SUV seen for the first time – Geely to be built, Proton Edar for sale in Malaysia!

Are you ready for this? Smart’s new all-electric crossover, the #1, will soon be unveiled to the world. It is a brand that has long lost ground in Malaysia, but is making a comeback following a distribution agreement signed between it and Proton Edar.

That’s right, the funky EV you see here should be launched in our part of the world to take full advantage of the government’s import, excise and road tax exemption for EVs. Luckily for us, our spy photographers managed to catch a glimpse of a test mule, along with the first images of its interior.

First off, the exterior design is something we’ve already seen in patent images revealed last October, with its full-width LED front and rear lights, trapezoidal lower front air intake, door handles flush, thick C-pillars, and frameless windows all around. This is all an extension of Mercedes-Benz’ “Sensual Purity” design language. The active grille with aero wheels, combined with the jelly bean appearance, helps create a drag coefficient of just 0.29. 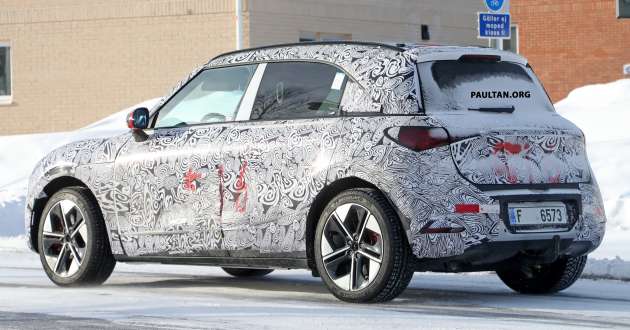 Inside, the cockpit seems to receive a small, almost minimalist instrumentation, next to which is a huge tablet-style infotainment screen. The lack of switchgear along the center stack indicates that media and HVAC controls are all integrated into the head unit, most likely voice and gesture activated, in addition to the obvious touch functionality.

There are three compartments along the floating center tunnel, as well as additional storage space below. We don’t see much else except for bolstered front seats with contrast stitching, as well as slim air vents.

There are no technical details available yet, but sources say #1 is almost ready and is currently going through final benchmark tests. The car will be unveiled in Berlin on April 7.

A company spokesperson said: “The combination of Mercedes-Benz design and clever engineering creates a compelling proposition. A pure and elegant exterior design strikes the perfect balance between aesthetics and aerodynamics backed by thorough engineering and premium quality. The smart #1 recently completed extensive pre-production testing in northern China, with its battery and technology systems undergoing ultimate testing in -40°C temperatures.